What Buddhism means to me 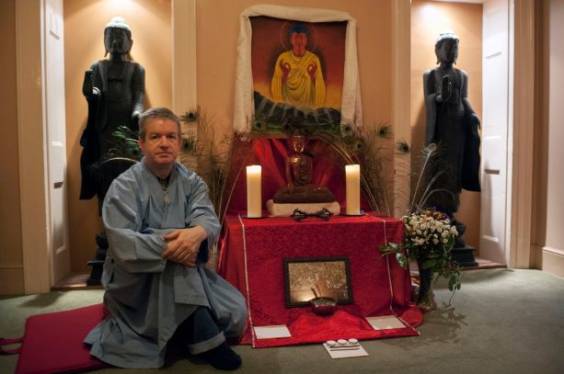 In a guest blog to celebrate Buddha Day we have an inspiring personal story:

As I write this I am reflecting on the title, what Buddhism means to me, I’m more inclined to ask: Why I am a Buddhist? I have been aware of Buddhism for most of my life. Growing up in Catholic Ireland in the 60s & 70s there are various sources that pointed me towards Buddhism, through conversation or seeing monks in a movie for example, I always had a positive heart-felt response to it. There was an innate sense of security or safety in these responses, it was something that was more than just some romantic idealising of something exotic and esoteric. Put simply, I was attracted to Buddhism, drawn to it. Back in the mid-70s I began to question what was being presented to me as the norm. I stopped going to Church when I was 13 as I no longer believed it to be relevant, I was also aware that I was not like other boys around me, my older brothers or class mates, I wasn’t interested in girls and had strong feelings for class mates and older men. By the time I was 14 I knew I was Gay and I knew I wasn’t Christian, much less a Catholic, despite having been reared to ‘believe’. I left school at 15 and never looked back.
Then, living in Dublin in the early 90’s when I was in my early 30s, I’d been reflecting on the point, the purpose of my life. Just what is a Gay man supposed to do in his 30s? Recreational drugs, compulsive sex and loud gay bars, discos & clubs were all well and good, but not something to base one’s life on. So what do I do? Some friends had begun looking for a Meditation Teacher as they had been reading books on Buddhism and Mysticism and they came across the, then, recently opened Dublin Meditation Centre (now https://dublinbuddhistcentre.org ). Though I was initially wary of a cult or a religious organisation, I listened to what my friends were saying (and they are still friends for over 30 years) and slowly my interest grew. I went on a 6 week Introductory course on Meditation & Buddhism in late Spring 1994, though it didn’t initially grab me, I did find I was beginning to make new friends with some very interesting people, of all ages and genders. In January 1995 I went along to a regulars’ night at the Centre and took part in a Puja (Ritual), the recitation of Mantras & Verses. My heart opened and I’ve never looked back, though I waver from time to time.
So, what Buddhism means to me. At its very core, Buddhism is Friendship. The Buddha himself gave Teachings on the importance of Friendship, we also have Meditations on The Breath & the development of Positive Emotion, also taught by The Buddha. These are lived within an Ethical framework that allows the individual to take responsibility for their actions within the context of a supportive Spiritual Community (The Sangha).
I am now ordained, though not a Monk in the traditional sense, but neither a lay person. I have travelled to China, France and regularly travel to Mexico, as well as all over the UK meeting people & making friends and practising. Buddhism gives me a meaning in life, a meaning that isn’t about me. Though it is important to look after one’s self, Buddhism is about all life, Humans, Animals and The Planet.
There are many LGBTQI people in our Order and Movement, we have centres all over the world, a grass roots community that emerged in the late 1960s counter culture and all are welcome to come and explore, at their own pace, what Buddhism might mean to them.

https://thebuddhistcentre.com/
May all beings be well, happy and free from suffering