Sharing our story with the nation 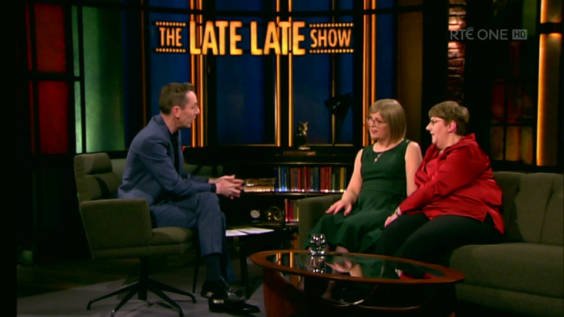 A few weeks ago Helen and I found ourselves walking down the steps, carefully so as not to trip, onto the set and into the arms of Ryan Tubridy, the host of Ireland’s long-running television chat show. Wow. It followed our piece on his radio show last year where we seemed to bond with him and he promised he’d have us on the Late Late. ‘Yeah sure’ I thought. But here we were, getting 18 minutes of Ireland’s prime time airwaves.

Helen and I met at a Star Trek convention in Leeds in 1980 and that, the relationship we have had since then, was the theme of both interviews. Well, my transition from male to female also came up! Ryan was a great host, putting us at ease and the questions he asked were, to some degree, planned in advance.

Ten years ago I couldn’t have done it. Ten years ago Helen couldn’t have either. But since then we’ve realised that, despite the nerves, despite the pressure of bearing your soul and even your most personal desires to the nation, we are happy to show that it can be done, that marriages can in fact survive such a tectonic shift in their basic structure. Because at the core of our relationship is love, respect and belief. We hope we showed that in the interview with Ryan. Certainly the amount of incredibly positive comments afterwards, both personally and on the Late Late Show Twitter feed, indicated that we rocked! Of course there were the trolls, the keyboard warriors sitting at home and being nasty and mean just for the sake of it. Guess what guys? We win .

There were two clips shown during the interview. One, a lovely video piece from our amazing daughter Jenny, was recorded by her in New York where she’s working and we almost cried seeing her.

The other was from the Late Late Show in 1990. Helen and I, and two great friends Sharon and Fearga, were in the audience when William Shatner – Kirk of Star Trek – was interviewed and Gay Byrne, the long-time host of the show, brought him over to give us fan-girls a chance to go all fan-girl over him! But of course, back then I wasn’t Philippa and some people have commented on how brave I was to allow the piece be shown. Again, ten years ago I wouldn’t have done it. But now I have the confidence and the belief in who I truly am. I don’t deny my past but I’ve moved on. Oh have I moved on.

I was also delighted to be able to give a plug for my first book, out next year from Mercier Press. If you thought that what we talked about on the LL was personal, well, wait til you read what I’ve written.

And lots of people have asked about the Green Room. We met all the other guests, Ryan came back after the show and chatted to us and our own guests (four of them – Dermot from Under the Rainbow, Declan who I went to secondary school with, Collette from my work and Angela from Helen’s work). It was relaxed, enjoyable and we got home at 3 a.m. Enough said.

It was an honour and a privilege to be able to share our story with the nation and Helen and I are happy to chat to other couples, or indeed any groups or organisations that want us to share the wisdom acquired over many, many years of heartache, tears, pain and a lot of joy. Contact us through the Under the Rainbow links.

Note: The above piece was written shortly after Philippa and Helen appeared on the Late Late Show and before the current Covid-19 emergency. We decided to publish this very positive blog now however to remind everyone that, despite the restrictions, the worry and anxiety and the effect on all our mental health, life will get better and together we can get through this.
We in Under the Rainbow are here for you with online counselling sessions should you need us.