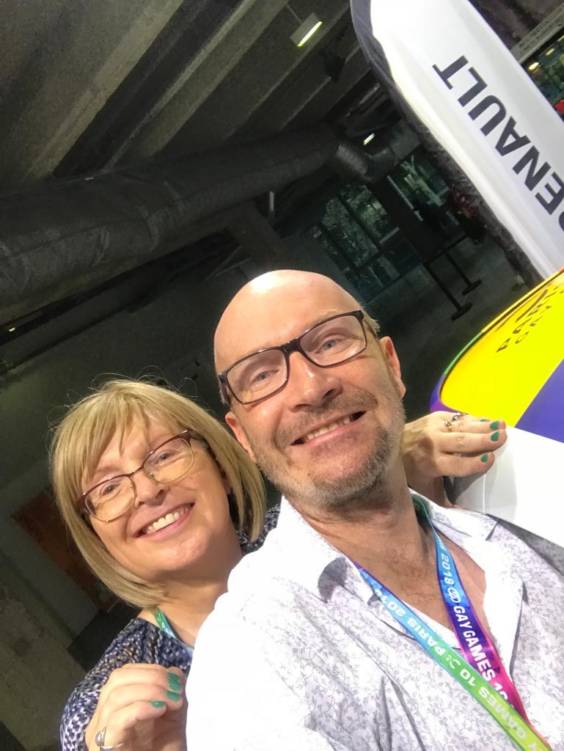 In advance of the joint Sporting Pride and Under the Rainbow webinar on 6th June 2020 Dermot and Philippa, who are part of both organisations, talk about their passion for sport and the benefits it can bring.

Dermot: Growing up Gay in Ireland, when I was a young man, was quite tough. I knew at an early age, that I was different. I did not realise this difference was being Gay until I was 20 years old, but I had many hardships along the way, before I fully accepted myself.

Philippa: I didn’t accept myself as trans* for many years, after suffering depression, frustration and even anger. It’s often said that trans* rights are ten years behind other areas of the Lesbian and Gay community and as I grew up, especially in the 1970s and 80s, there was little or no information available to me.

D: One such hardship was sport.  I desperately tried to fit into the world of sport. My father was great at GAA , being the only son, I was destined for the same route.  I tried so hard to fit in,  and I remember feeling sick , always on the outside, ashamed of who I was, until one day I told my mother in a fit of stress” I cannot even hit a ball”. That was the last of my GAA days and I never returned to a football pitch. I felt I was a failure.

P: I participated in quite a few sports as a teenager. I was a good tennis player (runner-up in the school tennis cup and even briefly made the Leinster team) quite good at running and was goalkeeper for one of the school football teams, though that was a short career as I let a goal in while I was reading a comic! I was board no. 2 on the school chess team too. I loved all sport, encouraged by my father and uncle, but on occasion I did get bullied a little for appearing different.

D: I always had a fondness for the Olympic Games, and I eagerly awaited every four years for the event to happen. I had an interest in athletics.  In 2015, having heard of a LGBT+ running club entitled Dublin Frontrunners. I joined the club. I soon grew a great interest in being a runner and have completed four  marathons to date. In fact, I found a connection with my father, he was a great cross-country runner, and I never knew this. In 2018, another dream of mine came through, I represented my country Ireland at the Gay Games in Paris. I will always remember walking into the Opening Ceremony that day, holding the Irish flag , in my team kit with a leprechaun hat on my head.  That shame and guilt I inherited as a young man for being Gay, and a failure at sport was gone forever.

P: It was just over two years ago when my true sporting passion really emerged and I joined Dermot and 140 others at the World Gay Games. I had always cycled, to school or to work, and in 2010 joined the women’s section of Orwell Wheelers. From finding 20km a challenge, within a few months I was cycling 100km every Saturday morning with the club and amazed myself by completing the Wicklow 200km Sportive soon after. When I heard about the Games I started training, joined the Team Ireland and had one of the most emotional and proud moments of my life standing on the podium in Paris with the Irish flag wrapped around me!

D: I have conquered my fear of sport, I now no longer feel I, or any other Gay man should feel excluded from sport. Sport can bring so many benefits to your mental health. It supported me in getting rid of the shame of being Gay and a re-connection with my father.

P: The joy I feel cycling or running, even walking briskly, is something that everyone can share in. Exercise of any sort can help you feel happier, lose weight, increase energy levels, improve muscle and bones, help with sleep, reduce stress, you might even live longer. Oh, and finally, according to the website Healthline exercise improves your sex life!

So you’ve no excuse not to participate in Sporting Pride’s #getoutgetactive campaign. Join us on our joint webinar on Saturday 6th June at 10.30 a.m. or ask for the recording. Check our social media for details.